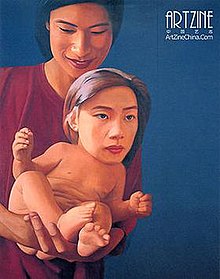 Ma Liuming 马六明 is a contemporary Chinese painter active in performance art. He is known most of all for his exploration of the power and poetry of public nudity in China, where such behavior was strictly forbidden. That is why he has been the target of government censorship, unable to perform in his own country for most of his career.

In 1981 Ma Liuming started to study oil painting with tutor Cai Erhe. He graduated from Hubei Institute of Fine Arts in 1991 in the Oil Painting Department. Two years later, he was one of the founders of Beijing East Village, an artists colony on the outskirts of Beijing. In the early 1990s it became a Mecca for experimental art forms. One of Ma Liuming’s first performances was called "Fen-Ma Liuming’s Lunch 1", a collaboration with Zhang Huan and Zhu Ming in 1994. He sat, completely nude, sucking a plastic tube that was attached to his penis. In 1994 Ma Liuming was arrested for a period of two months because of works like this. Many of the artists of the Beijing East Village fled in response to this police action.

In order to match his own uniquely androgynous appearance Ma Liuming developed his own performance persona – Fen-Ma Liuming, a hybrid figure of male and female components.

Discuss this Ma Liuming biography with the community: