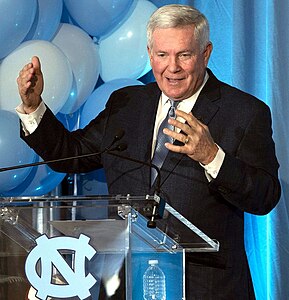 Who is Mack Brown?

William Mack Brown is a former American college football coach. He was most recently head football coach of the Texas Longhorns football team of the University of Texas at Austin.

Prior to his head coach position at Texas, Brown was head coach at Appalachian State, Tulane, and North Carolina. Brown is credited with revitalizing the Texas and North Carolina football programs. The Longhorns beat University of Southern California in the 2006 Rose Bowl, Ohio State at The Horseshoe in September 2005, and division rival Oklahoma in 1998, 1999, 2005, 2006, 2008, 2009, and 2013. The 2005 season was capped off by victories over Colorado and USC to win the Big 12 Conference and national championships, respectively. In 2006 he was awarded the Paul "Bear" Bryant Award for "Coach of the Year". On November 27, 2008 Brown achieved his 200th career win, making him the first Texas coach to reach that mark.

On December 14, 2013, Brown informed the team that he would resign after the Alamo Bowl.

Discuss this Mack Brown biography with the community: