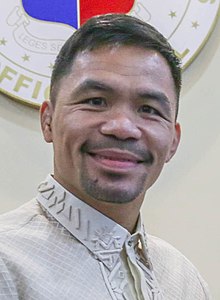 Emmanuel "Manny" Dapidran Pacquiao, PLH is a Filipino professional boxer and politician. He is the first and only eight-division world champion, in which he has won ten world titles, as well as the first to win the lineal championship in four different weight classes. He is also the second highest paid athlete in the world.

He was long rated as the best pound-for-pound boxer in the world by some sporting news and boxing websites, including ESPN, Sports Illustrated, Sporting Life, Yahoo! Sports, About.com, BoxRec and The Ring. In April 2012, Pacquiao dropped to number two in the rankings, behind Floyd Mayweather, Jr. He is currently ranked number seven on The Ring pound for pound list.

Aside from boxing, Pacquiao has participated in acting, music recording and politics. In May 2010, Pacquiao was elected to the House of Representatives in the 15th Congress of the Philippines, representing the province of Sarangani.

Discuss this Manny Pacquiáo biography with the community: