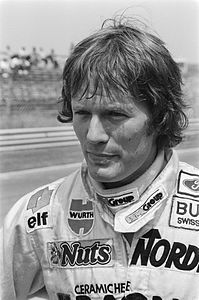 Who is Marc Surer?

Marc Surer is a former racing driver from Switzerland. He participated in 88 Formula One World Championship Grands Prix, debuting on 9 September 1979. He scored a total of 17 championship points.

Surer enjoyed BMW backing for most of his career, placing second in the 1978 F2 championship and winning the 1979 series in a works March-BMW. Marc's early F1 years were somewhat troubled; he broke his legs testing an ATS at Kyalami in 1980, and again racing there in 1981 for Ensign. Surer re-established himself at Arrows, but his BMW connections saw him placed at Brabham for 1985, later moving back to Arrows when they acquired BMW power.

Surer also enjoyed rallying, but a serious accident at the 1986 ADAC Hessen-Rallye in his Ford RS200 severely injured him and killed his co-driver and friend Michel Wyder. BMW retained him as a driver coach and later director of motorsport activities, and he remains deeply involved with the sport both through a keen interest in historic F2. Since 1996 he works as a television commentator at all Formula 1 events for Sky Sport which was former named as DF1 and Premiere alongside the lead commentator Jacques Schulz

Discuss this Marc Surer biography with the community: