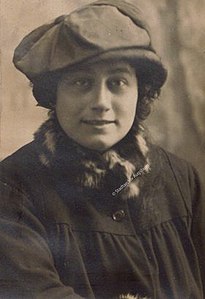 Who was Marianne Zoff?

Marianne Josephine Zoff was an Austrian actress and opera singer.

Zoff was the first wife of Bertolt Brecht, to whom she was married from 3 November 1922 until September 1927. Their daughter Hanne Marianne was born on 12 March 1923.

In 1928 Marianne Zoff married the actor Theo Lingen and Zoff's daughter Hanne grew up with her and Lingen. Lingen's popularity protected Zoff and her daughter, who were classified as half-Jews by the Nazi regime, from persecution. In 1928, Zoff and Lingen had a daughter, Ursula Lingen, who also is an actress.

Zoff died in 1984, aged 91, and is buried at the Vienna Zentralfriedhof.

Discuss this Marianne Zoff biography with the community: