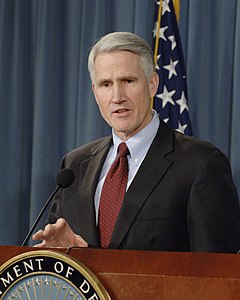 Who is Mark Kimmitt?

Mark Traecey Patrick Kimmitt was the 16th Assistant Secretary of State for Political-Military Affairs, serving under George W. Bush from August 2008 to January 2009. Prior to joining the State Department, he was a Brigadier General in the United States Army, and served as the Deputy Assistant Secretary of Defense for Middle East. Kimmitt has also served as Deputy Director for Strategy and Plans for the United States Central Command, and Deputy Director for Operations/Chief Military Spokesman for Coalition Forces in Iraq, and served at NATO's SHAPE headquarters in Belgium.

Discuss this Mark Kimmitt biography with the community: