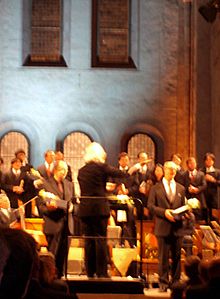 Who is Masaaki Suzuki?

Masaaki Suzuki is a Japanese organist, harpsichordist and conductor, and the founder and musical director of the Bach Collegium Japan. He also teaches and conducts at Yale University and has conducted orchestras and choruses around the world.

He was born in Kobe to parents who were both Christians and amateur musicians; his father had worked professionally as a pianist. Masaaki Suzuki began playing organ professionally at church services at the age of 12. He earned degrees in composition and organ at the Tokyo National University of Fine Arts and Music, then earned Soloist Diplomas at the Sweelink Conservatory in Amsterdam, where he studied harpsichord and organ with Ton Koopman and Piet Kee and improvisation with Klaas Bolt.

From 1981 to 1983 he was a harpsichord instructor at the Staatliche Hochschule für Musik in Duisburg, Germany. In 1983 he returned to Japan, where he began teaching at Kobe Shoin Women's University. In 1990 he founded Bach Collegium Japan, a baroque orchestra and chorus. The group began giving concerts regularly in 1992, and made its first recordings three years later, when they began recording Bach's complete cantatas for the Swedish label BIS Records.

Discuss this Masaaki Suzuki biography with the community: