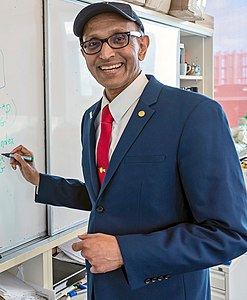 Who is Varghese Mathai?

Mathai Varghese is a mathematician and an Australian Research Council Discovery Outstanding Research Fellow at the University of Adelaide. His most influential contribution to date is the Mathai-Quillen formalism, which he formulated together with Daniel Quillen, and which has since found applications in index theory and topological quantum field theory. He became a full professor in 2006. He became Director of the Institute for Geometry and its Applications in 2009. In 2011, he was elected Fellow of the Australian Academy of Science. In 2013, he was appointed the Elder Chair in Mathematics and was elected Fellow of the Royal Society of South Australia.

Mathai's work may be considered to fall under the ambit of geometric analysis. His research interests are in analysis, index theory and noncommutative geometry. He currently works on mathematical problems that have their roots in physics, for example, topological field theories, fractional quantum Hall effect, and D-branes in the presence of B-fields. The main focus of his research is on the application of noncommutative geometry and index theory to mathematical physics, with particular emphasis on string theory. His current work on index theory is ongoing joint work with Richard Melrose and Isadore Singer, on the fractional analytic index and on the index theorem for projective families of elliptic operators. His current work on string theory is ongoing joint work with Peter Bouwknegt, Jarah Evslin, Keith Hannabuss and Jonathan Rosenberg, on T-duality in the presence of background flux.

Discuss this Varghese Mathai biography with the community: