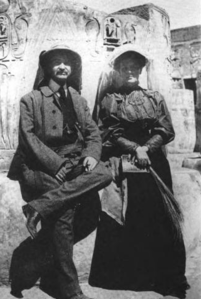 Who was Maud Gage Baum?

Maud Gage Baum was the wife of L. Frank Baum. Her mother was the suffragist Matilda Joslyn Gage. In her early life, she attended a boys' high school and was raised to be headstrong.

Maud lived in Fayetteville, New York, with her aging parents until she married Frank in 1882, sacrificing her college education at Cornell University. At the onset of their marriage, she accompanied her husband's acting troupe throughout the United States. After she became pregnant, Maud and Frank settled down in a rented house, where she gave birth to Frank Joslyn in 1883. Complications arising from giving birth to her second son Robert Stanton, in 1886, caused Maud to become afflicted with peritonitis. Ill for two years, she found solace in visiting her mother and siblings. In 1889 and 1891, she gave birth to Harry Neal and Kenneth Gage, respectively.

Described by her children as a no-nonsense mother, Maud took charge of the family finances and the disciplining of her children. She was their primary caretaker because her husband's business obligations frequently led to his being away for weeks at a time.

Discuss this Maud Gage Baum biography with the community: