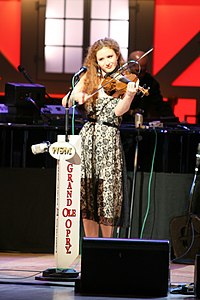 Who is Megan Mullins?

Megan Mullins is an American country music singer, songwriter, and multi-instrumentalist. At age eighteen, she made her debut on the country music scene with the single "Ain't What It Used to Be," a Top 40 hit on the Billboard Hot Country Songs charts. Her debut album was originally slated for release in 2006 but was never released.

Discuss this Megan Mullins biography with the community: