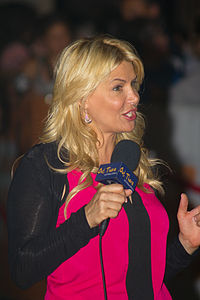 Who is Melissa DiMarco?

Melissa DiMarco is an actor, producer, and television personality. She is currently the star, creator, and a writer on Out There with Melissa DiMarco, an award-winning television comedy which airs on Citytv's national network and OMNI.1. Excerpts from DiMarco's celebrity interviews also air on OUTtv. One of DiMarco's best-known acting parts was her starring role on the teen drama series Degrassi: The Next Generation as Daphne Hatzilakos, teacher and later Principal of Degrassi Community School. She played Hatzilakos for eight seasons.

Her current show Out There mixes celebrity interviews with scripted comedy that takes a behind-the-scenes look at the life of an entertainment journalist. Among the celebrities she has interviewed on the show are Pierce Brosnan, George Clooney, Cameron Diaz, Colin Farrell, Salma Hayek, Queen Latifah, Ludacris, Matthew McConaughey, Brad Pitt, and Gene Simmons. Updates and excerpts from these interviews are syndicated internationally. Out There has been recognized for Outstanding Achievement in Creative Excellence at the 39th U.S. International Film and Video Festival.

Discuss this Melissa DiMarco biography with the community: