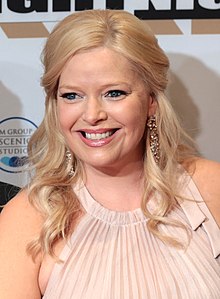 Who is Melissa Peterman?

Melissa Margaret Peterman is an American actress and comedian who is best known for her role as Barbra Jean in the television comedy series Reba. Currently, Peterman stars as Bonnie Wheeler in the ABC Family series Baby Daddy, and as host of ABC Family's Dancing Fools, ABCs Bet On Your Baby, and CMT's The Singing Bee.

Discuss this Melissa Peterman biography with the community: