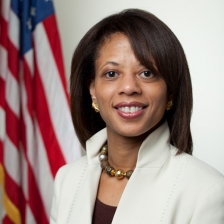 Who is Melody Barnes?

Melody C. Barnes was chosen by President Barack Obama to serve as the Director of the Domestic Policy Council for his administration. Obama announced her appointment on November 24, 2008. She was previously Executive Vice President for Policy at the Center for American Progress and led the CAP's Faith and Progressive Policy Initiative. She left the CAP in June 2008 to work on the Obama campaign. She also served on the advisory board for the Obama presidential transition team,.

Discuss this Melody Barnes biography with the community: