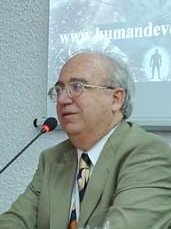 Who is Michael Cremo?

Michael A. Cremo, also known by his devotional name Drutakarmā dāsa, is an American freelance researcher who identifies himself as a Vedic creationist and argues that humans have lived on the earth for billions of years. In case of artifacts allegedly found in the Eocene auriferous gravels of Table Mountain, California and discussed in his book, Forbidden Archeology, Cremo argues for the existence of modern man on Earth as long ago as 30 to 40 million years ago. Forbidden Archeology, which he wrote with Richard L. Thompson, has attracted attention from mainstream scholars who have critiqued the views given on archeology and have referred to it as being pseudoscientific for a variety of reasons.

Discuss this Michael Cremo biography with the community: