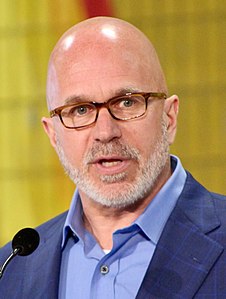 Who is Michael Smerconish?

Michael A. Smerconish is an American satellite radio and television personality, newspaper columnist, author, lawyer, and CNN talk show host. His talk radio show formerly was based in Philadelphia, Pennsylvania at Talk Radio 1210 AM WPHT. He began his full-time radio career in 2002. From January 2009 to April 15, 2013, Smerconish's two daily nationally syndicated radio programs had been heard on 70 stations in the United States, including WOR News Talk Radio 710 in New York City and KFWB News Talk 980 in Los Angeles. Smerconish canceled the morning show in November 2010 and the syndicated show in April 2013.

Discuss this Michael Smerconish biography with the community: