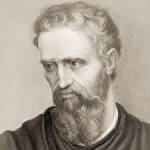 Michelangelo di Lodovico Buonarroti Simoni, commonly known as Michelangelo, was an Italian sculptor, painter, architect, poet, and engineer of the High Renaissance who exerted an unparalleled influence on the development of Western art. Despite making few forays beyond the arts, his versatility in the disciplines he took up was of such a high order that he is often considered a contender for the title of the archetypal Renaissance man, along with his fellow Italian Leonardo da Vinci.

Michelangelo was considered the greatest living artist in his lifetime, and ever since then he has been held to be one of the greatest artists of all time. A number of his works in painting, sculpture, and architecture rank among the most famous in existence. His output in every field during his long life was prodigious; when the sheer volume of correspondence, sketches, and reminiscences that survive is also taken into account, he is the best-documented artist of the 16th century.

Two of his best-known works, the Pietà and David, were sculpted before he turned thirty. Despite his low opinion of painting, Michelangelo also created two of the most influential works in fresco in the history of Western art: the scenes from Genesis on the ceiling and The Last Judgment on the altar wall of the Sistine Chapel in Rome. As an architect, Michelangelo pioneered the Mannerist style at the Laurentian Library. At the age of 74 he succeeded Antonio da Sangallo the Younger as the architect of St. Peter's Basilica. Michelangelo transformed the plan, the western end being finished to Michelangelo's design, the dome being completed after his death with some modification.

Discuss this Michelangelo biography with the community: