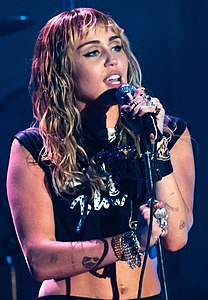 Who is Miley Cyrus?

Miley Ray Cyrus is an American actress and recording artist. The daughter of country singer Billy Ray Cyrus, she held minor roles in the television series Doc and the film Big Fish in her childhood. In 2006, Cyrus rose to prominence as a teen idol after being cast in the Disney Channel television series Hannah Montana, in which she portrayed the starring character Miley Stewart. After signing a recording contract with Hollywood Records in 2007, she released Hannah Montana 2: Meet Miley Cyrus, which served as the series' soundtrack and Cyrus' debut studio album. It sold three million copies in the United States, and additionally produced the Billboard Hot 100 top-ten single "See You Again". Later that year, her Best of Both Worlds Tour was adapted into the film Hannah Montana & Miley Cyrus: Best of Both Worlds Concert.

Cyrus' second album Breakout was certified platinum by the Recording Industry Association of America for sales exceeding one million copies. It also featured the successful tracks "7 Things" and "Fly on the Wall". That same year, she launched her film career as the voice actress for Penny in the animated film Bolt. She earned a nomination for the Golden Globe Award for Best Original Song for her performance of its theme song, "I Thought I Lost You". In 2009, Cyrus starred in the feature film Hannah Montana: The Movie, the soundtrack of which introduced her to country and adult contemporary markets. Its lead single, "The Climb", remains among Cyrus' most successful singles to date.

Discuss this Miley Cyrus biography with the community: