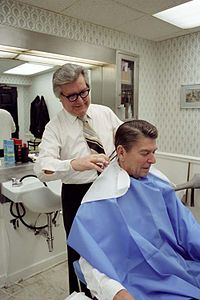 Who was Milton Pitts?

While Pitts was a staunch Republican, he always maintained that "my scissors are neither Republican nor Democrat," and he counted Democratic Senator George McGovern among his clients. Democratic President Jimmy Carter did not use Pitts, though, and instead brought in two hairstylists, Yves and Nancy Graux. President Reagan's Chief of Staff James Baker dismissed them in July 1982 and Pitts again became the sole White House barber.

During his years in the White House, Pitts won acclaim as "Washington's most famous barber." He appeared on Late Night with David Letterman on May 24, 1982. His twentieth anniversary celebration in 1985 was attended by numerous dignitaries including President Reagan, Defense Secretary Caspar Weinberger, Secretary of State George Shultz and Attorney General Edwin Meese.

Pitts regularly gave his clients advice, both fashion and political, and was well known for speaking frankly: he once "suggested that Richard Nixon do something about his nose and told Gerald Ford his ties were too loud."

Discuss this Milton Pitts biography with the community: