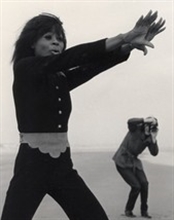 Who was Minah Bird?

Minah Ogbenyealu Bird, was a Nigerian model and actress active in the UK in the 1970s. After appearing in such films as Percy's Progress, The Stud and The London Connection, she vanished from public view from the late 1970s and was found dead in her London council flat, a few weeks after suffering an apparent heart attack in 1995.

Discuss this Minah Bird biography with the community: