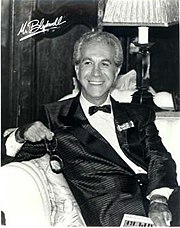 Who was Richard Blackwell?

Richard Blackwell was an American fashion critic, journalist, television and radio personality, artist, former child actor and former fashion designer, sometimes known just as Mr. Blackwell. He was the creator of the "Ten Worst Dressed Women List", an annual awards presentation he unveiled in January of each year. He published the "Fabulous Fashion Independents" list and an annual Academy Awards fashion review, both of which receive somewhat less media attention. His longtime companion, former Beverly Hills hairdresser Robert Spencer, managed him. He wrote two books, Mr. Blackwell: 30 Years of Fashion Fiascos and an autobiography, From Rags to Bitches.

Discuss this Richard Blackwell biography with the community: