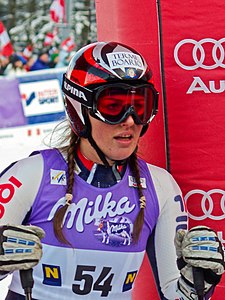 Nadia Fanchini is a World Cup alpine ski racer from northern Italy. Born in Lovere, Bergamo, Lombardy, she lives in Val Camonica. She is the sister of Elena Fanchini, also a member of the Italian World Cup team.

In the final World Cup race before the 2010 Winter Olympics, Fanchini injured both knees in a super G. She missed the Olympics and the remainder of the 2010 season, as well as the 2011 season.

Discuss this Nadia Fanchini biography with the community: