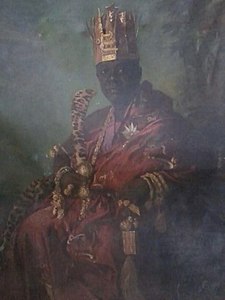 Who was Nana Sir Ofori Atta I?

Nana Sir Ofori Atta I was the Okyenhene or King of Akyem Abuakwa, one of the largest and wealthiest kingdoms of the then Gold Coast Colony, from his election in 1912 until his death in 1943.

Ofori Atta was educated in Basel Mission schools and at its Akuropon seminary. He worked as a clerk, and then served in the West African Frontier Force, fighting during the Yaa Asantewaa War. Elected Omanhene of Akyem Abuakwa in 1912, he became the first African member of the Legislative Council in 1916 to represent the Gold Coast. "Ofori Atta was the son of a senior official of the palace; his mother was the descendant of one of the founders of the kingdom.... Once in power, he was determined to return Akyem Abuakwa to its former glory. His approach to politics was a mix of educational modernism and aristocratic nepotism that gave as much importance to merit as it did to blood." He created a dynasty by privileging education both amongst his sons and daughters, through two paths, “one firmly rooted in a concern for binding the state by the traditionally sanctioned method of multiple marriage and the other rooted in his strong case for ‘modernisation’ and ‘progress’.”

He was the brother of Dr. J. B. Danquah, and the father of Aaron Ofori Atta, William Ofori Atta and Dr. Susannah Ofori Atta.

Discuss this Nana Sir Ofori Atta I biography with the community: