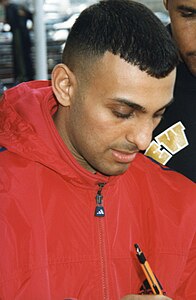 Who is Naseem Hamed?

He is the former WBO, WBC, IBF, and Lineal featherweight champion, and European bantamweight champion. He also knocked out Wilfredo Vázquez who had just been stripped of the WBA title prior to their fight. Hamed is rated by BoxRec as the fifth pound-for-pound best British boxer of all time.

Hamed was known for his boxing antics and spectacular ring entrances that have included entering the ring via a Chevrolet Impala, a flying carpet, a lift, and a palanquin; re-enacting the video of Michael Jackson's Thriller; and wearing a Halloween mask. He was also known for his front somersault over the top rope into the ring.

Discuss this Naseem Hamed biography with the community: