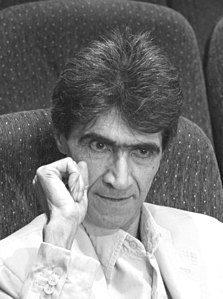 Born in Abadan, Iran, After early experiences as a storywriter, he began filming documentaries in 1967.. He made his debut, Tranquility in the Presence of Others, in 1970 and gained the attention of Iranian critics. His concern for the ethnography and atmosphere of southern Iran is notable in his films.

Most of his works have been based on novels. Captain Khorshid is an adaptation of Ernest Hemingway's To Have and Have Not, which won the third prize at the 48th Locarno International Film Festival in Switzerland in 1988.

In 1999 he directed a segment of the film Tales of Kish, which was nominated for the Palme d'Or at the Cannes Film Festival.

Discuss this Nasser Taghvai biography with the community: