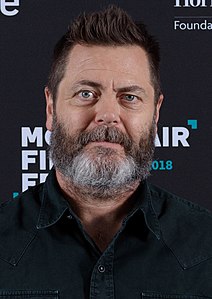 Who is Nick Offerman?

Nick Offerman is an American actor, writer, and carpenter widely known for his breakout role as Ron Swanson in the acclaimed NBC sitcom Parks and Recreation, in which he received the Television Critics Award for Individual Achievement in Comedy.

Discuss this Nick Offerman biography with the community: