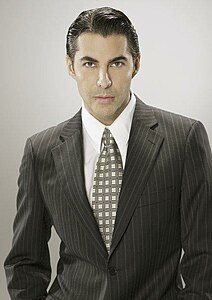 Who is Nicolas Felizola?

Nicolas Felizola reminds you of a Renaissance artist, like a modern-day Leonardo da Vinci. He is a cultured lover of knowledge; a well rounded man who is in touch with all of his senses, both spiritually as well as intellectually. His art has surpassed limitations, being exhibited in galleries, museums and bi-annuals throughout the world. A Photographer, Fashion Designer, and Attorney at law, Nicolas Felizola has immortalized jet setters and celebrities internationally. He has been featured in various publications as one of the 100 most Outstanding Artists of the 21st Century. However, his true passion is fashion design. Felizola has been a photographer for celebrated international fashion designers like Gucci and Givenchy. Their close relationship has inspired him to become one of the most progressive fashion designers of today’s demanding fashion-conscious public. Understated elegance and glamour are the hallmarks of Nicolas Felizola’s design. His style is unique, with a signature image always bearing his personal touch. Felizola’s total devotion and passion for the Haute Couture style has caused him to be widely honored with multiple prestigious awards, such as the “Best Designer of Miami Fashion Week,” twice awarded by Tiffany & Co. for his Privé and Uomo collections; the “Zanetti Murano Award” in Italy; In Mexico, the “Universal Excellence Award”; he was featured in Forbes Magazine’s “America’s Young Fashion Designers,” recognized amongst ten Hispanic Designers that are influential in the United States, on par to names such as Carolina Herrera and Oscar De La Renta. His self “clean” and “simple” designs have been showcased on the most elite runways of the world, sharing the stage with Escada, Valentino, Oscar de la Renta and Dior. Nicolas Felizola will continue bringing new ideas by presenting his version of fashion with a distinctive and innovative style. In his tireless search of excellence, Nicolas Felizola defines “I have not yet created my best design, nor have I taken my best photograph.”.

Discuss this Nicolas Felizola biography with the community: