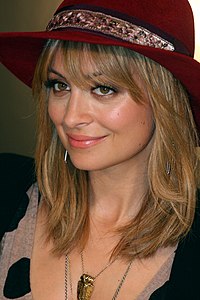 Who is Nicole Richie?

Nicole Camille Richie is an American fashion designer, author, actress and television personality. Richie rose to prominence for her role in the Fox reality television series, The Simple Life, alongside her childhood best friend and fellow socialite Paris Hilton, which lasted five seasons. The Simple Life was a hit for the Fox network, premiering with 13 million viewers, and brought Richie and Hilton to international recognition. Richie's personal life attracted significant media attention during The Simple Life's five-year run and she was a constant fixture of tabloid journalism before and after her appearance. Hilton and Richie are often given the distinction of being the first pair of socialites to become "famous for being famous" through reality television.

Afterwards she turned her focus on other projects including charity work and environmental issues. Richie is married to musician Joel Madden and they have two children, Harlow and Sparrow. Richie and Madden founded "The Richie Madden Children's Foundation" in 2010. Richie has starred as one of the three mentors on NBC's Fashion Star. On July 17, 2014, Richie's reality show Candidly Nicole premiered on VH1.

Discuss this Nicole Richie biography with the community: