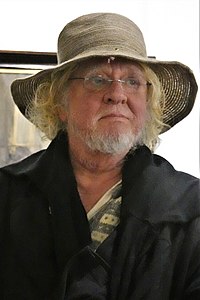 Who is Odd Nerdrum?

Odd Nerdrum, is a Norwegian figurative painter. Themes and style in Nerdrum's work reference anecdote and narrative, while primary influences by the painters Rembrandt and Caravaggio place his work in direct conflict with the abstraction and conceptual art considered acceptable in much of his native Norway, and in opposition to the art of the time.

Nerdrum creates six to eight paintings per year. These include Still life paintings of small everyday objects like bricks, portraits and self portraits whose subjects are dressed as if from some other time and place, and large paintings, allegorical in nature that present a sense of the apocalyptic and again reference another time.

Nerdrum says that his art should be understood as kitsch rather than art as such. "On Kitsch", a manifesto composed by Nerdrum describes the distinction he makes between kitsch and art. Nerdrum's philosophy has spawned The Kitsch Movement among his students and followers, who call themselves kitsch painters as opposed to artists.

Discuss this Odd Nerdrum biography with the community: