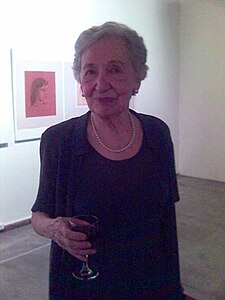 Who was Olga Blinder?

Olga Blinder, was a Paraguayan painter, engraver and sculptor. She lived through the Chaco War, World War II, the 1947 Paraguayan Civil War and Paraguay's coup d'états in 1954 and 1989.

Blinder was also a licensed professor who has taught arts and creative education for over 30 years. She has also published numerous books and articles on education and art.

She began displaying her work in Paraguay in 1950 and began exhibiting abroad in 1953. In 1954 she helped co-found the Grupo Arte Nuevo in Asunción.

She is the former director of the Escolinha de Arte of Paraguay in the Brazilian Cultural Mission and of the Instituto de Arte of the National University of Asunción. She was also an advisor to the Ministry of Education for the development of textbooks.

She has been recognized by the League of Women's Rights, decorated by the Brazilian government, and received the Integración Latinoamericana award from the Ministry of Culture and Education of Argentina.

Discuss this Olga Blinder biography with the community: