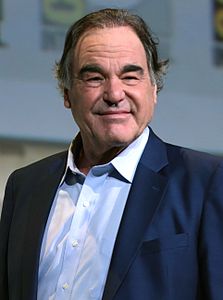 Who is Oliver Stone?

William Oliver Stone is an American film director, screenwriter, producer and military veteran. Stone came to public prominence between the mid-1980s and the early 1990s for writing and directing a series of films about the Vietnam War, in which he had participated as an infantry soldier. Many of Stone's films focus on contemporary and controversial American political and cultural issues, such as JFK, Natural Born Killers, and Nixon.

Stone's films often combine different camera and film formats within a single scene as evidenced in JFK, Natural Born Killers, and Nixon. British newspaper The Guardian has described Stone as "one of the few committed men of the left working in mainstream American cinema." Stone has received three Academy Awards for his work on the films Midnight Express, Platoon, and Born on the Fourth of July. He was presented with the Extraordinary Contribution to Filmmaking Award at the 2007 Austin Film Festival.

Discuss this Oliver Stone biography with the community: