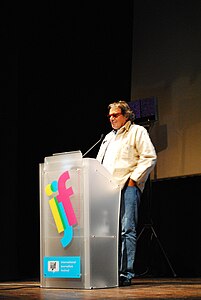 Who is Oliviero Toscani?

Oliviero Toscani is an Italian photographer, best-known worldwide for designing controversial advertising campaigns for Italian brand Benetton, from 1982 to 2000.

Toscani took up photography following the steps of his father, Fedele Toscani, who used to be a photoreporter for the newspaper Corriere della Sera. After obtaining his diploma at the Kunstgewerbeschule in Zurich, he started working with different magazines, including Elle, Vogue, L'Uomo Vogue and Harper's Bazaar.

In 1982 he started working as Art Director for the Benetton Group. One of his most famous campaigns included a photo of David Kirby dying of AIDS, lying in a Columbus, Ohio, hospital bed, surrounded by his grieving relatives. Thepicture was controversial due to its similarity to a pietà painting and because some thought the use of this image to sell clothing was exploiting the victim, though the Kirby family stated that they authorized the use and that it helped increase AIDS awareness. Other advertisements included references to racism, war, religion and even capital punishment.

Discuss this Oliviero Toscani biography with the community: