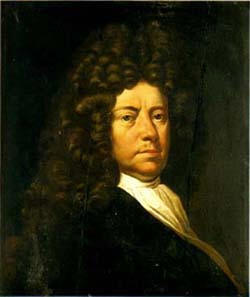 Otto Mencke was a 17th-century German philosopher and scientist. He obtained his doctorate at the University of Leipzig in 1666 with a thesis entitled: Ex Theologia naturali — De Absoluta Dei Simplicitate, Micropolitiam, id est Rempublicam In Microcosmo Conspicuam.

He is notable as being the founder of the very first scientific journal in Germany, established 1682, entitled: Acta Eruditorum. He was a professor of moral philosophy at the University of Leipzig, but is more famous for his scientific genealogy that produced a fine lineage of mathematicians that includes notables such as Carl Friedrich Gauss and David Hilbert.

The Mathematics Genealogy Project database records as many as 69,247 mathematicians and other scientists in his lineage. The Philosophy Family Tree records 535 philosophers in his lineage as of May 2010.

Isaac Newton and Mencke were in correspondence in 1693.

Discuss this Otto Mencke biography with the community: