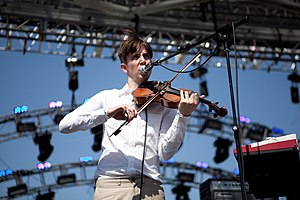 Who is Owen Pallett?

Michael James Owen Pallett is a Canadian composer, violinist, keyboardist, and vocalist, who performs solo as Owen Pallett or, before 2010, under the name Final Fantasy. As Final Fantasy, he won the 2006 Polaris Music Prize for the album He Poos Clouds.

On his Final Fantasy releases, Pallett has collaborated with Leon Taheny, who is credited as drummer and engineer. Following the release of Heartland, Pallett has toured with guitarist/percussionist Thomas Gill and more recently with his former collaborators in Les Mouches, Rob Gordon and Matt Smith.

Pallett has been noted for his live performances, wherein he plays the violin into a loop pedal, a technique also used by musicians such as Andrew Bird, Jeremy Larson, Kishi Bashi, Emily Wells and Zoë Keating. Pallett uses Max/MSP and SooperLooper to do multi-phonic looping, which sends his violin signal to amplifiers across the stage.

Discuss this Owen Pallett biography with the community: