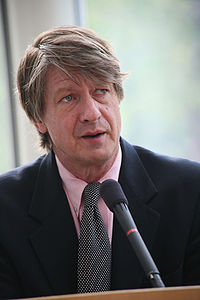 Patrick Jake "P. J." O'Rourke is an American political satirist, journalist, writer, and author. O'Rourke is the H. L. Mencken Research Fellow at the Cato Institute and is a regular correspondent for The Atlantic Monthly, The American Spectator, and The Weekly Standard, and frequent panelist on National Public Radio's game show Wait Wait... Don't Tell Me!. In the United Kingdom, he is known as the face of a long-running series of television advertisements for British Airways in the 1990s.

He is the author of 17 books, of which his latest, Holidays in Heck, was released November 1, 2011. This was preceded on September 21, 2010, by Don't Vote!-It Just Encourages the Bastards, and on September 1, 2009, Driving Like Crazy with a reprint edition published on May 11, 2010. According to a 60 Minutes profile, he is also the most quoted living man in The Penguin Dictionary of Modern Humorous Quotations.

Discuss this P. J. O'Rourke biography with the community: