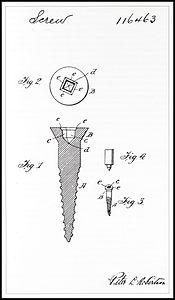 Who was P. L. Robertson?

Peter Lymburner Robertson was a Canadian inventor, industrialist, salesman, and philanthropist who popularized the square-socket drive for screws, often called the Robertson drive. Although a square-socket drive had been conceived decades before, it had never been developed into a commercial success, because the design was difficult to manufacture, and Robertson's efficient manufacturing technique using cold forming for the screw's head is what made the idea a commercial success. He produced his screws in his Milton, Ontario factory starting in 1908. The brand has been sold over the years, and the manufacturing for the present corporation is done in Jiaxing, Zhejiang, China; but the Milton, Ontario, building is still a head office.

Robertson also wrote a book which suggested a strategy to end the Great Depression. It discussed topics including national debts, currencies, and the gold standard.

Robertson was born in 1879 in Seneca Township, Ontario. As a salesman for a Philadelphia tool company in eastern Canadian sales territories, he was demonstrating tools one day when his straight-bladed screwdriver slipped and cut his hand. This prompted him to design a different drive for screws that would slip less, leading to his square-socket drive. Robertson headed the Robertson Screw Company until his death in 1951.

Discuss this P. L. Robertson biography with the community: