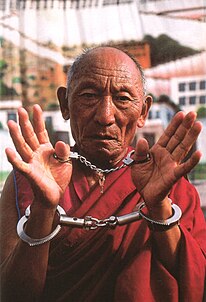 Who is Palden Gyatso?

Palden Gyatso is a Tibetan Buddhist monk who was born in Tibet in 1933. During the Chinese invasion of Tibet he was arrested for protesting and spent 33 years in Chinese prisons and labor camps, where he was extensively tortured. After his release in 1992 he fled to Dharamsala, in exile. He is still a practising monk and political activist, traveling the world publicizing the cause of Tibet. He is the subject of the 2008 film Fire Under the Snow.

Discuss this Palden Gyatso biography with the community: