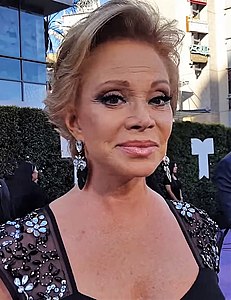 Who is Paloma San Basilio?

Paloma San Basilio is a Spanish singer whose career has spanned five decades. She was given a Latin Grammy Award for lifetime excellence in Spanish music.

She was born in Madrid, and at the age of six months the family moved to Seville, where she was raised until the age of eight. Her family then moved to Lugo.

She starred in the Spanish-language premiere production of Andrew Lloyd Webber's Evita at Teatro Monumental in Madrid in 1980. The show later transferred to Barcelona and later to Mexico City and other cities in Latin America. One of her first greatest hits were "Juntos". She represented Spain at the Eurovision Song Contest 1985 in Gothenburg, Sweden, with the ballad "La fiesta terminó", composed by Juan Carlos Calderón, and finished 14th. She also starred in highly acclaimed Madrid productions of Man of La Mancha, My Fair Lady and Victor/Victoria. She is considered one of the best Spanish representatives in the history of the Eurovision Song Contest.

She recorded several tracks with Plácido Domingo or José Carreras, and a particularly notable duet version of "Soledad" by Emilio José. In 2006, she won the special Latin Grammy, "Excelencia Musical 2006", in New York.

Discuss this Paloma San Basilio biography with the community: