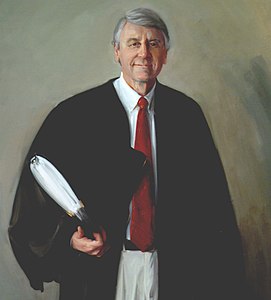 Who is Pasco Bowman II?

Pasco Middleton Bowman II is a senior federal judge on the United States Court of Appeals for the Eighth Circuit.

A former Fulbright scholar, Bowman was born in Harrisonburg, Virginia and grew up in New Market and Timberville, Virginia. He graduated from New Market High School, and in 1955 received a B.A. in English from Bridgewater College in Bridgewater, Virginia. He took his J.D. from New York University in 1958, where he was a Root-Tilden scholar and served as managing editor of the law review. He then went into private practice of law. From 1958 to 1964, with time out for military service and his Fulbright year at the London School of Economics, he was associated with the New York City law firm of Cravath, Swaine & Moore.

Discuss this Pasco Bowman II biography with the community: