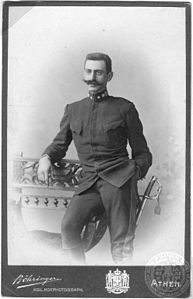 Who was Pavlos Melas?

Pavlos Melas was an officer of the Hellenic Army, and he was among the first who organized and participated in the Greek Struggle for Macedonia.

He was born in Marseilles, France in a family with origin from Northern Epirus. He was the son of Michail Melas who was elected MP for Attica and mayor of Athens. At an early age Pavlos moved to Athens to study, and later joined the Army, graduating from the Hellenic Army Academy as an artillery lieutenant in 1891. In 1892, he married Natalia Dragoumi, the daughter of Kastorian politician Stephanos Dragoumis and sister of Ion Dragoumis. In 1895, the couple had a son named Michael.

Melas, with the cooperation of his brother-in-law Ion Dragoumis, the consul of Greece in the then Ottoman occupied Monastir, Christos Kottas,and Germanos Karavangelis, metropolitan bishop of Kastoria, tried to raise money for the economic support of Greek efforts in Macedonia. After the Ilinden-Preobrazhenie uprising, he decided to enter Macedonia in June 1904, to assess the situation and to see if there is any possibility of establishing a military unit to fight the Bulgarians and the Ottoman Turks.

Discuss this Pavlos Melas biography with the community: