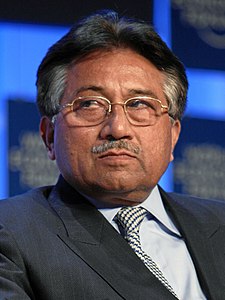 Who is Pervez Musharraf?

Pervez Musharraf is a retired four-star general and a politician who seized power through a military coup d'état in 1999. He served as the tenth President of Pakistan from 2001 until 2008. Prior to that, he was the 13th Chief of Army Staff from October 1998 till November 2007, and was also the tenth Chairman of the Joint Chiefs of Staff Committee of Pakistan Armed Forces from 1998 until 2001. Commissioned from the Pakistan Army in 1964, Musharraf rose to national prominence after being appointed a four-star general in October 1998 by then-Prime Minister Nawaz Sharif. Musharraf was the mastermind and strategic field commander behind the Kargil infiltration. Previously, Musharraf played a vital role in the Afghan civil war, both assisting the peace negotiations and attempting to end the bloodshed in the country. After months of contentious relations with Prime Minister Sharif, Musharraf was brought to power through a military coup d'état in 1999, subsequently placing the Prime minister under a strict house-arrest before moving him to Adiala Jail in Punjab Province.

With Shaukat Aziz having completed his term as Prime Minister and the suspension of the Chief Justice in 2007, Musharraf dramatically fell from power in 2008, tendering his resignation of the presidency after facing potential impeachment, led by the elected opposition parties. Musharraf then lived in self-imposed exile in London for four years, returning to Pakistan on 24 March 2013, in order to participate in the upcoming general elections, despite receiving death threats from the Taliban. Whilst absent from Pakistan, the country's courts issued arrest warrants for both Musharraf and Aziz, for their alleged involvement in the assassination of Benazir Bhutto and Akbar Bugti. He was disqualified from taking part in the 2013 election by High Court judges in April 2013.

Discuss this Pervez Musharraf biography with the community: