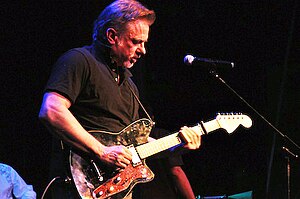 Who is Pete Anderson?

Anderson is most known for his guitar work with, and critically acclaimed production of, country music star Dwight Yoakam from 1984 through 2002, a partnership that resulted in numerous platinum records, sold-out tours, and some fine music in the Bakersfield and hillbilly traditions. Anderson became known as a top-flight producer who could get the job done. On guitar, Anderson's technical proficiency and versatility allows him to perform a variety of styles, including country, western, rock, rockabilly, soul, blues, Flamenco, Tex-Mex.

Discuss this Pete Anderson biography with the community: