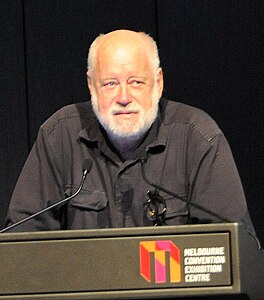 Who is Phillip Adams?

He has been a successful advertising executive and film producer, and has served on many boards including Greenpeace Australia, Ausflag, Care Australia, Film Victoria, National Museum of Australia, both the Adelaide and Brisbane festivals of ideas, the Montsalvat Arts Society and the Don Dunstan Foundation.

Awards include four honorary doctorates from Australian universities; two Orders of Australia; Republican of the Year 2005; the Senior ANZAC Fellowship; the Australian Humanist of the Year, the Golden Lion at Cannes; the Longford Award; and the Henry Lawson Australian Arts Award. In 1997 the International Astronomical Union named a minor planet orbiting the sun between Mars and Jupiter after him. A National Trust poll elected him one of Australia's 100 national living treasures.

Discuss this Phillip Adams biography with the community: