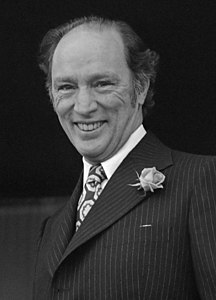 Who was Pierre Trudeau?

Trudeau began his political career as a lawyer, intellectual, and activist in Quebec politics. In the 1960s, he entered federal politics by joining the Liberal Party of Canada. He was appointed as Lester Pearson's Parliamentary Secretary, and later became his Minister of Justice. From his base in Montreal, Trudeau took control of the Liberal Party and became a charismatic leader, inspiring "Trudeaumania". From the late 1960s until the mid-1980s, he dominated the Canadian political scene and aroused passionate reactions. "Reason before passion" was his personal motto. He retired from politics in 1984, and John Turner succeeded him as Prime Minister.

Admirers praise the force of Trudeau's intellect and salute his political acumen in preserving national unity against the Quebec sovereignty movement, suppressing a violent revolt, and establishing the Charter of Rights and Freedoms within Canada's constitution. Critics accuse him of arrogance, economic mismanagement, and unduly favouring the federal government relative to the provinces, especially in trying to distribute the oil wealth of the Prairies.

Discuss this Pierre Trudeau biography with the community: