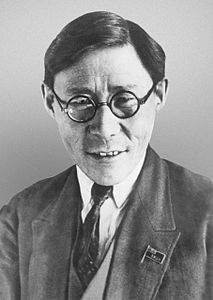 Platon Oyunsky Платон Алексеевич Слепцов) was a Soviet Yakut statesman, writer and translator, seen as one of the founders of modern Yakut literature. He took part in the creation of the national written language and in the cultural building of the modern Yakut nation. Oyunsky is one of organizers of the Yakut autonomous republic, the Union of writers of Yakutia, Language and literature scientific research Institute.

He was born in 3 Zhekhsogon nasleg of Boturuss (nowadays Tatta) ulus. The origin of Sleptsovs was called "the origin of a shaman" - such an etymology of Oyunsky's per-name. He was prosecuted during the Great Purge, and died in prison in 1939. He was rehabilitated on 15.10.1955.

Oyunsky collected and published a number of Olonkho epic poems.

The State Prize of the Yakut ASSR, awarded for achievements in literature, arts, and architecture, was named after him. His name bears the Sakha drama theater, a literary museum, one of the streets in Yakutsk.

Discuss this Platon Oyunsky biography with the community: