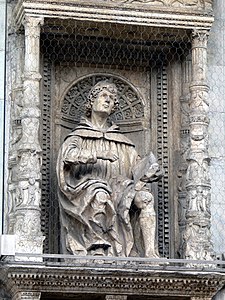 Who was Pliny the Elder?

Gaius Plinius Secundus, better known as Pliny the Elder, was a Roman author, naturalist, and natural philosopher, as well as naval and army commander of the early Roman Empire, and personal friend of the emperor Vespasian. Spending most of his spare time studying, writing or investigating natural and geographic phenomena in the field, he wrote an encyclopedic work, Naturalis Historia, which became a model for all other encyclopedias. Pliny the Younger, his nephew, wrote of him in a letter to the historian Tacitus:

Pliny is referring to the fact that Tacitus relied on his uncle's now missing work on the History of the German Wars. Pliny the Elder died on August 25, AD 79, while attempting the rescue by ship of a friend and his family from the eruption of Mount Vesuvius that had just destroyed the cities of Pompeii and Herculaneum. The prevailing wind would not allow his ship to leave the shore. His companions attributed his collapse and death to toxic fumes, but they were unaffected by the fumes, suggesting natural causes.

More Quotes by Pliny the Elder »

Discuss this Pliny the Elder biography with the community: