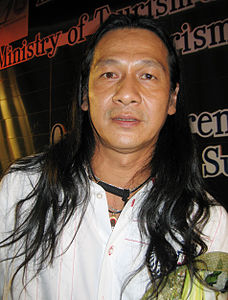 Who is Pongpat Wachirabunjong?

Pongpat Wachirabunjong is a Thai singer, actor and film director.

He is well known in Thailand for his role in the action films Heaven's Seven and Seven Street Fighters, as the red-shorts-clad Sergeant Dab Jampoh.

In addition to his film roles, he has acted in many lakorns, and is a popular singer.

Pongpat made his debut as a director in 2007 with the critically acclaimed drama film, Me ... Myself.

Discuss this Pongpat Wachirabunjong biography with the community: