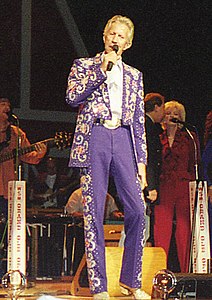 Who was Porter Wagoner?

In 1967, he introduced then-obscure singer Dolly Parton on his long-running television show, and they were a well-known vocal duo throughout the late 1960s and early 1970s.

Known as Mr. Grand Ole Opry, Wagoner charted 81 singles from 1954–1983. He was elected to the Country Music Hall of Fame.

Discuss this Porter Wagoner biography with the community: