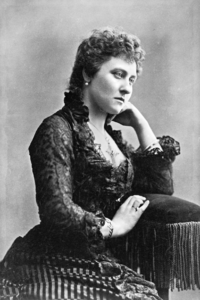 Who was Princess Louise, Duchess of Argyll?

The Princess Louise was a member of the British Royal Family, the sixth child and fourth daughter of Queen Victoria and her husband, Albert, Prince Consort.

Louise's early life was spent moving among the various royal residences in the company of her family. When her father, the Prince Consort, died on 14 December 1861, the court went into a period of intense mourning, to which Louise was unsympathetic. Louise was an able sculptor and artist, and several of her sculptures remain today. She was also a supporter of the feminist movement, corresponded with Josephine Butler and visited Elizabeth Garrett. She held that "the subject of Domestic Economy lies at the root of the – highest life of every true woman."

As an unmarried daughter of Victoria, Louise served as an unofficial secretary to her mother between 1866 and 1871. The question of Louise's marriage was discussed in the late 1860s. Suitors from the royal houses of Prussia and Denmark were suggested, but Victoria wanted new blood in the family, and therefore suggested a high-ranking member of the aristocracy. Despite opposition from members of the royal family, Louise fell in love with John, Marquess of Lorne, the heir to the Duke of Argyll, and Victoria consented to the marriage, which took place on 21 March 1871. Despite a happy beginning, the two drifted apart, possibly because of their childlessness and the Queen's constraints on their activities.

Discuss this Princess Louise, Duchess of Argyll biography with the community: