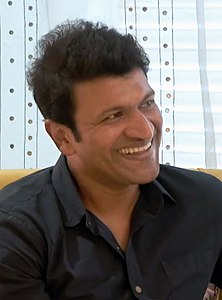 Who is Puneeth Rajkumar?

Puneeth Rajkumar is an Indian film actor and playback singer, who appears in Kannada films. He is the youngest son of Kannada actor Rajkumar and the younger brother of Shivarajkumar and producer, actor Raghavendra Rajkumar. As a child artist, he appeared in 12 films. He won the National Film Award for Best Child Artist for the film Bettada Hoovu in 1986.

After having appeared in films as child actor in the 1980s, Puneeth Rajkumar made his debut in a leading role in the film Appu in 2002. He has been noted for his performances in films like Abhi, Aakash, Arasu, Milana, Jackie, Hudugaru, Paramathma, Yaare Koogadali.

He hosts the quiz show Kannadada Kotyadhipati which is modeled on the Hindi show Kaun Banega Crorepati hosted by Amitabh Bachchan, which was in turn modeled on British show Who Wants to Be a Millionaire? hosted by Chris Tarrant.

Discuss this Puneeth Rajkumar biography with the community: