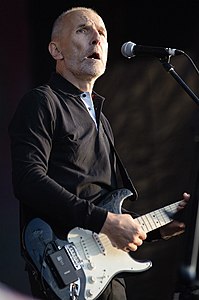 Who is Pyotr Mamonov?

Mamonov was one of the few rock musicians from former USSR who managed to achieve recognition abroad, through his collaboration with Brian Eno in the late 1980s. Around the same period he started acting in films, and over the next decade wrote, produced and acted in several one-man theatrical performances establishing himself as a cult figure in Russia.

One of Mamonov's best-known film appearances is in the leading role in Pavel Lungin's 1990 Taxi Blues. His theatre creations include Is There Life on Mars?, an absurdist take on Anton Chekhov's A Marriage Proposal, and Chocolate Pushkin, which makes a comical reference to the Russian national poet Alexander Pushkin. Piotr explains the name for the album as his own comparison to a popular DJ who calls himself "Black Elvis" and also describes the genre on this record as "lit-hop".

In the 1990s, Mamonov converted to Orthodox Christianity, left the capital, and settled in a village. In 2001 he appeared in a short but characteristic role in Serguei Loban's "Dust" that was released only 4 years later and became a cult movie. He returned to play the lead role in Pavel Lungin's religious film "The Island", which closed the 2006 Venice Film Festival. His acting in the film was praised by Alexis II, Patriarch of Moscow, and won him a Best Actor Nika Award.

Discuss this Pyotr Mamonov biography with the community: